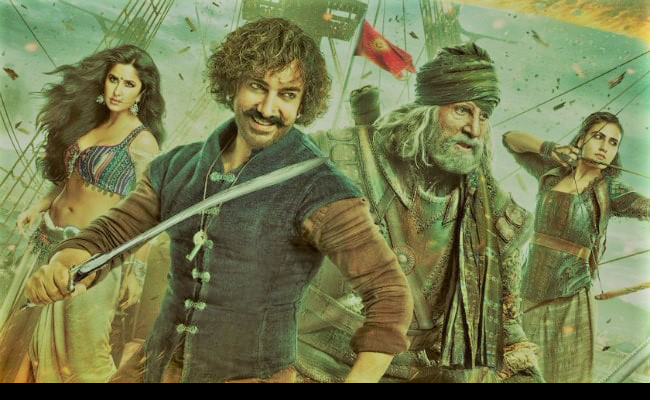 Thugs of Hindostan: How Aamir Khan failed to light up box office this Diwali

Aamir Khan is referred to as Mr Perfectionist for a reason. The 53-year-old actor dives into any project with all his creativity and candour. From beefing up in Ghajini to learning the nuances of wrestling in Dangal, Aamir likes to get into the skin of the character. Unlike his contemporaries, he likes to work on one project a year, and it’s been the same drill for over a decade now.

So when Aamir plunged into Vijay Krishna Acharya’s Thugs of Hindostan, an action adventure based on Philip Meadows Taylor’s 1839 novel Confessions of a Thug, the excitement around the big-budget film was palpable.

One, it was large-scale film which touched up the concept of thugs back in the day. Second, Thugs of Hindostan got two of the best talents in the country – Aamir and Amitabh Bachchan together on the big screen for the first time. Third, it promised to be a film high on action sequences. Fourth, Bollywood fans always await the release of an Aamir Khan film because Mr Perfectionist hardly disappoints.

But this time his fans were in for a rude shock when Thugs of Hindostan hit the screens a day after Diwali. The desi version of The Pirates of The Caribbean with a half-baked screenplay got a thumbs down from critics and fans alike. So much so that Thugs of Hindostan’s run at the box office reminds one of Salman Khan’s Race 3.

After the initial anticipation which helped Aamir’s latest release to become the biggest opener of 2018 by raking in Rs 52 crore at the ticket window, the numbers started to dwindle soon despite being released in 5000 screens across the country.

What began at Rs 52 crore on Thursday dipped to Rs 30.75 crore on Friday. The numbers took a further plunge at the box office as it came down to Rs 26 crore on Saturday. Though the film managed to cross the Rs 100-crore mark within three days of its release, Thugs of Hindostan can be called Aamir’s worst film in the recent times.

If Aamir’s 2016 film Dangal crossed the Rs 300-crore mark in domestic market, his 2014 film PK, too, earned around Rs 340 crore. However, Aamir’s latest release is struggling to even reach the Rs 200 crore mark.

Known to be the badshah of box office, Aamir had to face his biggest defeat in the name of Thugs of Hindostan. Made on a budget of Rs 300 crore, the film failed to live up to the mammoth expectations and poor reviews and negative word of mouth have only added fuel to the fire.

A DIWALI CRACKER THAT FAILED TO LIGHT UP

Diwali has often turned out to be a lucrative option for the filmmakers. The festive time often sets cash registers ringing and many films have earned the fruits of a festive release. So when Aamir locked in Diwali 2018 for Thugs of Hindostan, all eyes were on this festive bonanza. However, rather than bursting into the sky with innumerable colours, Aamir’s latest releases turned out to be a damp squib.