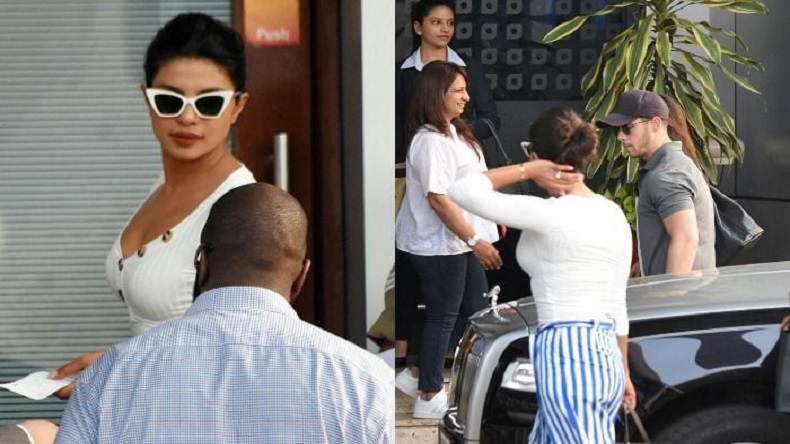 Priyanka Chopra and Nick Jonas are said to be location hunting for their big fat wedding. Yesterday, the couple visited the Mehrangarh fort, most probably for it!

Priyanka Chopra and Nick Jonas’ trip to Jodhpur has fuelled speculation that the duo will tie the knot in Rajasthan. The duo is said to be location hunting for their big fat wedding. Yesterday, the couple visited the Mehrangarh fort. The two walked hand-in-hand and braved the harsh October sun.

PeeCee played the tourist guide and related the history of the heritage site.

Tongues have been wagging that they will exchange vows later this year or early 2019. PeeCee has always been keen on a traditional wedding ceremony.

Nick and Priyanka were connected through a friend. After the initial introduction, the two texted each other but didn’t actually meet in-person until about six months later.

In May 2017, they attended the Met Gala together. While Jonas said the two “had a great time”, he also insisted they went only as friends.

“Our lives were kind of taking us in different places,” Nick told the story during an episode of “The Tonight Show” with Jimmy Fallon.

It was only in the subsequent few weeks that the couple spent a lot of quality time together and started to spark romance rumours. While people around them started questioning what was cooking, Nick maintained then that their relationship was just platonic.

“People thought we were being coy, and so did we until we cut to now (and) we’re engaged,” he said, adding, “So, the story sort of wrote itself.”

Nick said it wasn’t until about five months ago that the two decided to give a romantic relationship a try.

“It was kind of immediate, and I think we just knew it was right and jumped right in,” he said. “And we’re very happy.”

Nick and Priyanka, who got engaged in July, formalised their relationship with a traditional Indian ‘roka’ ceremony in Mumbai, India, last month.