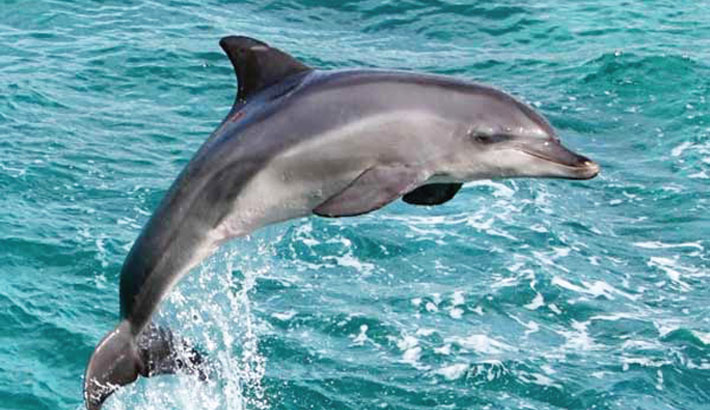 River Dolphin is the National Aquatic Animal of India. This mammal is also said to represent the purity of the holy Ganga as it can only survive in pure and fresh water. Platanista gangetica has a long pointed snout and also have visible teeth in both the upper and lower jaws. Their eyes lack a lens and therefore function solely as a means of detecting the direction of light. Dolphins tend to swim with one fin trailing along the substrate while rooting around with their beak to catch shrimp and fish. Dolphins have a fairly thick body with light grey-brown skin often with a hue of pink. The fins are large and the dorsal fin is triangular and undeveloped. This mammal has a forehead that rises steeply and has very small eyes. River Dolphins are solitary creatures and females tend to be larger than males. They are locally known as susu, because of the noise it makes while breathing. This species inhabits parts of the Ganges, Meghna and Brahmaputra rivers in India, Nepal, Bhutan and Bangladesh, and the Karnaphuli River in Bangladesh.

The river dolphin is a freshwater or river dolphin found in the Indian subcontinent which is split into two subspecies, the Ganges river dolphin and the Indus river dolphin. The Ganges river dolphin has a sturdy, yet flexible, body with large flippers and a low triangular dorsal fin. It weighs up to 150kg. The calves are chocolate brown at birth and become grayish brown in adulthood with a smooth and hairless skin. Females are larger than males. It can only survive in pure and fresh water

River dolphin is a critically endangered species in India and therefore, has been included in the Schedule I for the Wildlife (Protection) Act, 1972. The main reasons for decline in population of the species are poaching and habitat degradation due to declining flow, heavy siltation, construction of barrages causing physical barrier for this migratory species.