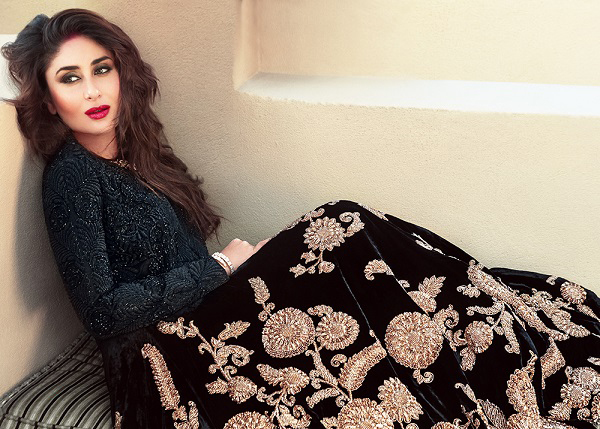 Despite being a chubby kid, Kareena made a point to get fit before starting her acting career and surprised everyone with her size zero figure which she achieved under the guidance of nutritionist Rujuta Diwekar. The fitness freak authored a book ‘The Style Diary of a Bollywood Diva’, giving out little secrets of her healthy life and the role of power yoga in her life. Kareena Kapoor, a fashion icon, also creates her designs for clothing brand Globus.

From receiving a Filmfare Award for Best Female Debut for the 2000 film Refugee to getting a wax statue at Madame Tussauds, London, Kareena Kapoor Khan has worked in a number of movies. The actress is the brand ambassador of brands like Lakme, Lux, Sony, Colgate and Berger Paints. She married Saif Ali Khan in 2012 and the Pataudi daughter-in-law has followed the royal legacy and is seen celebrating Eid as well as the traditional Punjabi and Christian routines.

Born on 21st September, 1980 in Mumbai to actors Randhir Kapoor and Babita, the actress got her name from the book titled Anna Karenina, which Babita was reading while she was pregnant with Kareena. Brought up in a mixed culture of Punjabi and Sindhi, Kareena practised Hinduism and was also introduced to Christianity by her mother. Karisma Kapoor, Kareena’s elder sister, is an actress known for films like Dil To Pagal Hai, Judwaa and Biwi No. 1.

Kareena Kapoor studied at Jamnabai Narsee School in Juhu, and then went to Dehradun to study at Welham Girls Boarding School. It is believed that Kareena was not very keen on shifting to a boarding school but later admitted that she liked the experience. After completing her graduation, she came back to Mumbai and pursued commerce from Mithibai College for two years. Thereafter, Kareena enrolled for a three-month course in microcomputers at the Harvard University. Post the course, the actress took up law and started to study at the Government Law College in Mumbai and developed an acute interest in reading. After a year, the actress decided to pursue her interest in acting and quit academic learning. Kareena began her training to be an actress after she joined an acting school under the mentorship of Kishore Namit Kapoor, a member of the Film and Television Institute of India. It was in 2000 tat J. P. Dutta offered Kareena her first film, Refugee along with debutant Abhishek Bachchan.

Kareena was in a long-standing relationship with Shahid Kapoor. The two started dating after they worked together in Fida in 2004. While dating Shahid, Kareena switched to being a vegetarian and also began following a few religious rituals. After three-long years of being together, the two called off their relationship right before the release of their 2007 blockbuster movie Jab We Met. Soon after breaking up with Shahid, Kareena started dating Saif Ali Khan, whom she had previously worked in LOC Kargil and Omkara with. The two came close during the shoot of Tashan in 2008 and started dating, following which the two actors moved in together. The couple is fondly called Saifeena in the industry. Kareena and Saif tied the knot after roughly four years of courtship in 2012.

During her training at the acting school, Kareena was offered the film Kaho Naa…Pyaar Hai directed by Rakesh Roshan. However, she backed out of the film as she felt that Hrithik Roshan, the director’s son, was getting more importance. She was then offered J. P. Dutta’s Refugee, which also marked the debut of Abhishek Bachchan. The actress won the Filmfare Award for Best Female Debut for Refugee, which had an average box-office record. Her second film was Mujhe Kucch Kehna Hai opposite Tusshar Kapoor followed by Yaadein, Ajnabee and Asoka. Even though the films were not box-office successes, the critics lauded Kareena for her acting skills. The character of Pooja a.k.a Poo in Kabhi Khushi Kabhie Gham… garnered her rave reviews and was hailed as a fashion icon. One of her unforgettable roles was in Chameli where she played the role of a prostitute and went on to win the Filmfare in the category of Special Award for Best Performance.

Kareena played the character of Dolly Mishra in Omkara, which was loosely based on Desdemona from Shakespeare’s play Othello. The film, directed by Vishal Bhardwaj, helped Kareena establish herself as a fine actor. In 2007, with the release of Jab We Met, directed by Imtiaz Ali, Kareena Kapoor became the most sought actress in the industry as the film not only highlighted her chemistry with Shahid Kapoor but also put her in the league of effortless actors. Taran Adarsh lauded the actress stating, ‘Kareena is in top form as well. Jab We Met is a turning point in her career [personally as well as professionally]. Fantabulous — that’s the right word to describe her work this time. The confidence with which she handles the contrasting characterization speaks volumes. This film should do for her what Kuch Kuch Hota Hai (1998) did for Kajol’.

In Rajkumar Hirani’s 3 Idiots, Kareena played the role of Pia, a doctor, which was appreciated by the critics. Her portrayal of Daboo in Golmaal 3 and Rosie in Talaash: The Answer Lies Within, co-starring Aamir Khan and Rani Mukerji, were much appreciated. Her role of Mahi Arora in Madhur Bhandarkar’s Heroine garnered her positive reviews wherein the critics praised her for delivering a superlative performance. In 2015, the actress was seen opposite Salman Khan in Bajrangi Bhaijaan, which went to break the record of PK and Happy New Year.

The actress has made special appearances in movies by performing dance numbers in films like Don (2006), Billu (2009), Rowdy Rathore (2012), Dabangg 2 (2012) and Brothers (2015). In 2016, Kareena featured opposite Arjun Kapoor, in Ki & Ka, where she played the role of a strong-headed independent woman. The actress plays the tole of a doctor in Punjab in Abhishek Chaubey’s Udta Punjab, co-starring Alia Bhatt, Diljit Dosanjh, and Shahid Kapoor.