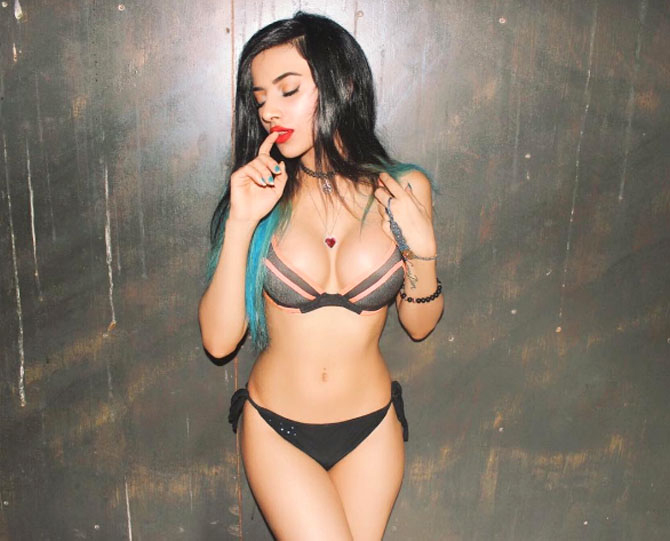 Sakshi Chopra, all of 20 years, is a social media star.

Trained at London’s Trinity School since she was 10 and the Manhattan School of Music, Sakshi wants to take her singing career international.

But it’s her superhot pix on SM that grabs all the attention.

“Why is there such a big deal about clothing?”

You have such hot pictures on social media.

Why there is such a big deal about clothing?

Guys can wear whatever they want and there is no judgement. But the minute a girl wears something, she is called names.

Why are we criticised?

I wear what I want because I feel happy in it.

My goal is to sing.

In my music videos, I will be dressed in all kinds of crazy stuff (laughs).

I have grown up watching Pink. I love her attitude and the way she dresses.

At functions, my family members always told me, ‘Don’t do this, don’t wear that because it’s too exposing.’

I guess growing up, I was always told no, so it was a form of rebellion for me. And I just went crazy.

Some of your pictures are topless as well.

Some people say you love it, then go for it.

Others say you shouldn’t be doing this in a country like India because it is conservative.

What does your family say?

But I did not listen to her because it is my body and this is what I like to wear.

This is how I choose to live my life, these are my choices.

I got my first bikini when I was 11, but there was no social media back then.

When I turned 18, I started posting pictures on Instagram and that’s when they realised I was not going to change.

I never understood what the big deal was. It’s just a fabric with which we cover our body.

Why is everybody so opinionated about it? It’s just clothes.

Over the years, my mom and the rest of my family came around. They appreciate me as a person doing what I want to do, and not give a shit about what anybody thinks.

My grandfather asked me if I knew what it meant.

My mom told me that my grandfather doesn’t like my pictures, but he chooses to let me live my life.

Do you get affected by people who slam you for being so different from your great grandfather?

Honestly, why would you connect me to my great grandfather?

We are completely different people.

It’s like saying a lawyer’s daughter must become a lawyer.

He was my great grandfather, but his beliefs were different. The way he lived his life was different.

Why should I be confined to what he thought?

I am a girl of today’s generation.

What are your career plans?

I have a couple of videos on YouTube. I want to create my own music, put my heart and soul into it.

I don’t want to sing for anyone.

I am in the process of writing and recording an original English track.

Have you thought about acting?

Acting is not on top of my list, but if a good film comes my way, why not?

My ultimate goal is to have an audience; I am on social media to build an audience.

I have been offered bold roles in Bollywood and Tollywood, but that is not what I am looking at.

Just because I post topless pictures doesn’t mean I am open to those kind of roles.

I want to learn the art before getting into it, and I really care how they present me.