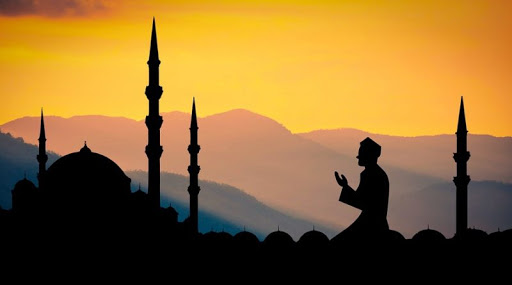 Prophet Mohammad (early 7th century). Many Muslims believe that
Prophet Mohammad is not the “founder” of Islam but he received the
divine revelations recorded in the Koran during his life (570-632
A.D.).

They regard that their religion is the restoration of the original
religion of Abraham (Judaism) through Prophet Mohammad in the 7th
century. They would also stress that Islam is a timeless religion,
not just because of the eternal truth that it proclaims but also
because it is every person’s religion, the natural religion in which
every person is born.

The Koran is the God’s Speech. It is the sacred book of Islam
explained as the religion of Abraham. In the Koran, Abraham is the
patriarch who turned away from idolatry, who came to his Lord with an
undivided heart, who responded to God in total obedience when
challenged to sacrifice his son, and who served God uncompromisingly.

There are two main divisions within Islam. The Sunnis are followers
of the political successors of Mohammad. The Shites are followers of
Mohammad’s family successors all martyred at an early age.

The primary goal of Islam is to enjoy eternal life, both physical and
spiritual in heaven with Allah (God). Heaven is a paradise in which
all the joys and pleasures abound, in which one lives amid beautiful
gardens and fountains, enjoying the choicest foods served by sweet
maidens. Man is the noblest creation of God, ranking above the
angels.

Total submission to Allah is the single path to salvation, and even
that is no guarantee, for Allah may desire even a faithful soul to
experience misery. The good Moslem surrenders all pride, sins, and
follows explicitly the will of Allah as revealed in the Koran by His
last and greatest prophet, Mohammad. This and this alone brings a
full and meaningful life and avoids the terrors of the hell which
befalls sinners and infidels.

Moslems believe in the five doctrines and observe the five pillars.
The virtues of truthfulness, temperance and humility before God are
foremost for Islam, and the practices of fasting, pilgrimage, prayer
and charity to the Moslem community are most necessary to please
Allah.

Islam means submission, surrender to the Will of God, called Allah.
Those who submit are called Moslems.

The Koran records that Mohammad was the Seal of the Prophets, the last
of a line of God’s messengers that began with Adam (first man created
by God) and included Abraham, Noah, Moses, and Jesus. Mohammad left
for the future guidance of the community the word of God revealed to
him and recorded in the Koran, and the Sunna, the collective name for
his opinions and decisions as recorded in the tradition literature
(Hadith).

Islam recognizes God’s sending of messengers to all peoples and his
granting of “Scripture and Prophethood” to Abraham and his
descendants which results in the awareness of a very special link
between Muslims, Jews, and Christians as all Abraham’s children.
The Koran mentions, among others, Abraham and his sons, Solomon and
the queen of Sheba, and the disciples of Jesus. Also the Muslims
recognize earlier Scriptures, namely, the Taurat (Torah) given to
Moses, the Zabur (Psalms) of David, and the Injil (Gospel) of Jesus.

* God: the sole creator, the One and Only

* The Last Day: every soul will stand alone and will have to account
for its deeds

* Predestination: the divine initiative is all-decisive in bringing
humans to faith (“had God not guided us, we had surely never been
guided,” 7:43),

When applied to Islam, the word religion has a far more comprehensive
meaning than it commonly has in the West. Islam encompasses personal
faith and piety, the creed and worship of the community of believers,
a way of life, a code of ethics, a culture, a system of laws, an
understanding of the function of the state, in short, guidelines and
rules for life in all its aspects and dimensions.

Islam teaches absolute monotheism and Mohammad’s primacy as the last
Prophet. Stress is on the brotherhood of believers, non-difference of
religious and secular life, obedience to God’s Law, abstinence from
alcohol, good conduct, and the limitation of all except Allah. Today
Islam is the world’s fastest growing religion.

Islam is based upon five pillars or principle acts of faith to which
every Moslem in the world adheres.

* Faith in Allah (Shahada): there is no God but God (Allah)

* Mohammad is God’s Prophet or Messenger

* Alms Giving (Zakat): support the mosque and the poor

* Fasting (Sawm): throughout Ramadan, the ninth month of the Moslem
calendar, the faithful fast (abstaining from food and drink) from
sunrise to sunset.

Pilgrimage (Hajj): At least once in a lifetime every believer must go
to Mecca, the holy city. They go dressed in simple, seamless white
garments. This is the binding force of the people who have embraced
Islam.

According to Muslims, the Sharia (the way, denoting the sacred law
governing the life of individuals as well as the structures of
society) is derived from four sources

* the Koran, the holy scripture

* the Sunna (customs) of the Prophet, which are embodied in the
Hadith (tradition)

* Qiyas (analogy) the application of a decision of the past, or the
principles on which it was based, to new questions

* Ijma (consensus) the consensus of the community of believers, who,
according to a saying of the Prophet, would not agree on any error

After the death of Mohammad, a series of successors (Khalifa, or
Calipha, or IMAM) were chosen to rule in his place.

The Moslims celebrate two main festivals. Id-al-Fitr, the
festival of the breaking of the fast on the last day of Ramadan.
Id-al-Adha, the festival of the sacrifice (in memory of Abraham’s
willingness to sacrifice his son). This is observed on the 10th day
of the month of pilgrimage.

The interpretations of Jihad (striving in the way of God), sometimes
added as an additional duty, vary from sacred war to striving to
fulfill the ethical norms and principles expounded in the Koran.

Allah is the Supreme Creator and Sustainer, all-knowing and
transcendent and yet the arbiter of good and evil, the final judge of
humans.

The five Pillars of Faith:

* faith in the only God Allah and His Prophet Mohammad

* fasting during Ramadan, the ninth month of the Islam calendar

* pilgrimage to the Holy city Mecca

The Koran is the Word of God and the sacred scripture mediated through
the Angel Gabriel to the Prophet Mohammad.

The direct communion of each man with God, that all are equal in the
eyes of God and therefore priests or other mediators are not needed.

The pure transcendence of God, great beyond imagining, no form or idol
can be worshipped in His Name.

The soul of a man is immortal, embodied once on earth then entering
Heaven or Hell upon death according to its conduct and faith on earth.

In the Last Judgement and that man should stand in humble awe and fear
of God’s wrathful and vengeful power.

That truthfulness should be observed in all circumstances, even though
it may bring injury or pain.

That salvation is only obtained through God’s Grace and not through
man’s efforts yet he should do all good and avoid all sins, especially
drunkenness, usury, and gambling.