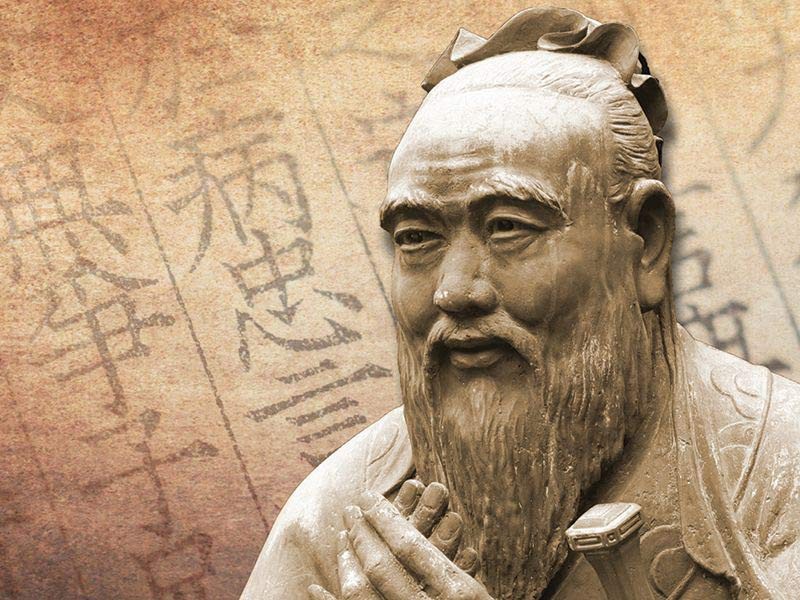 Confucianism began 2,500 years ago in China.

The Analects, which contain the basic teachings are among the four
classics. Analects was compiled by the students of Confucius after
his death. Because it was not written as a systematic philosophy, it
contains frequent contradictions and many of the philosophical
doctrines are ambiguous. Besides the Analects, Doctrine of the Mean,
Great Learning, and writing of Mencius are also sacred books.

There are no formal sects within Confucianism. Followers are free to
profess other religions yet still be Confucianists.

Estimated at 350 million, mostly in China, Japan, Burma and Thailand.

The primary goal of Confucianism is to create true nobility through
proper education and the inculcation of all the virtues. It is
described as the return to the way of one’s ancestors, and the
classics are studied to discover the ancient way of virtue. Spiritual
nobility is attainable by all men. It is perceived as a moral
achievement.

Confucius accepted the Tao (see Taoism), but placed emphasis on the
return to an idealized age and the cultivation of the superior man and
on the pragmatic rather than the mystical. The superior man’s
greatest virtues are benevolent love, duty, wisdom, truth, and
propriety. Salvation is seen as realizing and living one’s natural
goodness, which is endowed by heaven through education. The superior
man always knows what is right and follows his knowledge.

Besides virtue, the five relationships offer the follower of
Confucianism a means for progressing. These five relationships are
ruler and ruled, father and child, husband and wife, older sibling and
younger sibling, and friend and friend. Ancestors are revered in
Confucianism, and it is assumed that their spirit survives death.
With respect to a deity, Confucius himself, was an agnostic,
preferring to place emphasis on the ethical life here rather than to
speak of a spiritual life beyond earthly existence, while guiding
men’s minds not to the future, but to the present and the past.

Confucianism, the philosophical system founded on the teaching of
Confucius (551-479 BC), dominated Chinese sociopolitical life for most
of Chinese history and largely influenced the cultures of Korea,
Japan, and Indochina.

Confucianism is and has been for over 25 centuries the dominant
philosophical system in China and the guiding light in almost every
aspect of Chinese life. Confucius and his followers traveled
throughout many feudal states of the Chinese empire persuading rulers
to adopt his social reforms. They did not offer a point by point
program but stressed instead the way or “one thread” Jen, which is
translated as humanity or love, that runs through all of Confucius’
teachings. They urged individuals to strive for perfect virtue,
righteousness (called i), and improvement of character.

Confucius as a person was dedicated to the preservation of traditional
ritual practices with an almost spiritual delight in performing ritual
for its own sake. He taught the importance of harmony in the family,
order in the state, and peace in the Empire. Teachings emphasize a
code of conduct, self-cultivation, and propriety, and thus the
attainment of social and national order. Stress is more on human duty
and the ideal of the “superior man” than on a divine or supramundane
reality. Still Confucius fasted, worshipped the ancestors, attended
sacrifices, and sought to live in harmony with Heaven.

There is a presence of the Supreme Ruler in all things, and in Heaven
as the ethical principle whose law is order, impersonal and yet
interested in mankind.

The purpose of life is to pursue an orderly and reverent existence in
accord with “Li,” propriety or virtue, so as to become the superior
man.

The Golden Rule: Never do to others what you would not like them to
do to you.

Confucius, China’s first sage, is the master of life whose teachings
embody the most profound understanding of earth and Heaven, and that
Mencius is China’s second sage.

The writings of Confucius is a scriptural truth. The four sacred
books are; The Analects, Doctrine of the Mean, Great Learning, and
Mencius.

Each man has five relationships entailing five duties to his fellow
man: to his ruler, to his parents and children, to his wife, to his
brothers and sisters, and to his friend. The foremost is being his
familial duties.

Man is a master of his own life and fate, free to conduct himself as
he will, and that he should cultivate qualities of benevolence,
righteousness, propriety, wisdom, and sincerity.

The family is the most essential institution among men, and religion
should support the family and the state.