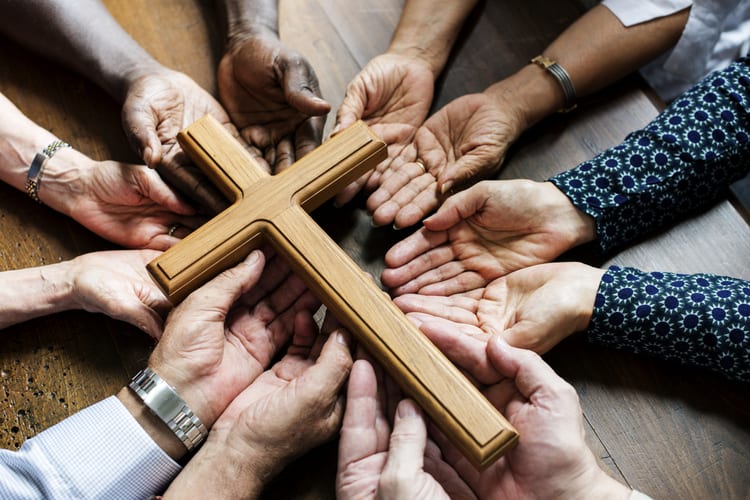 Christianity began about 2,000 years ago in Palestine.

Christianity is based on the teaching of Jesus of Nazareth (Jesus
Christ), believed to be the Son of God.

The Christian Bible which consist of the Old Testament (39 Books of
Hebrew Bible) and the New Testament (27 Books). Some sects (Catholic
and some Protestants) also recognize an additional 7 Books of the
Apocrypha. It also contains a collection of early Christian writings
proclaiming Jesus as lord and savior.

Christianity is divided into three main sects; Roman Catholic, Eastern
Orthodox, and Protestant. Among Protestants there are over 2,000
smaller sects, including Lutherns, Presbyterians, Baptists,
Methodists, Congregationalists, and Unitarians.

Over 1 billion, largest of religions.

The goal of Christianity is eternal life with God in heaven, a perfect
existence in which God’s glory and bliss are shared. It is also a
personal life, enjoyed differently by individuals according to the
amount of grace received and accepted in life.

Man’s plight is caused by disobedience to God’s will as revealed in
the law of God found in the Bible. God’s justice demands that a
penalty must be paid for that disobedience. That penalty was paid by
God himself taking on human flesh in the person of Jesus and dying the
ignominious and completely undeserved death of a criminal on a cross.
By this sacrificial act, God, out of sheer grace and love made it
possible for all those who believe in the saving power of this act to
have credited to their account the complete and perfect obedience of
Jesus so that God regards them the same as if they had never sinned.

Jesus’ resurrection from the dead is proof of God’s power over sin
and death and proof that he can save in this way. Those who accept
God’s gift of salvation are empowered by the Holy Spirit to begin to
live a life of increasing virtue and obedience to God and in this way
show their gratitude to God for freeing them from the guilt of their
sins.

The good Christian lives a life of virtue and obedience to God out of
gratitude to God for sacrificing Jesus for the sins of all who come to
accept Jesus Christ as personal Savior and Lord. Jesus is to return
again to judge the world and bring God’s rule to the earth. Through
following the law of God as found in the Holy Bible and through God’s
grace, man attains salvation.

Christianity is the religion of about a billion people whose belief
system centers on teachings of Jesus Christ. Christians believe that
the original human beings rebelled against God, and from that time
until the coming of Christ the world was ruled by Sin. Jesus of
Nazareth was and is the Messiah or Christ promised by God in the
prophecies of the Old Testament (the Hebrew Bible). By his life,
death, and Resurrection Jesus freed those who believe in him from
their sinful state and made them recipients of God’s saving Grace.
Many also await the Second Coming of Christ, which they believe will
complete God’s plan of salvation.

The majority of Christians adhere to the Apostles’ Creed: I believe
in God, the Father Almighty, Maker of Heaven and Earth, and Jesus
Christ, His only Son, our Lord. Who was born of the Virgin Mary by
the power of the Holy Spirit, suffered under Pontius Pilate, was
crucified, dead and buried. He descended into hell. The third day He
rose again from the dead. He appeared to his disciples, commanding
them to spread the good news of salvation from sin and death, to all
people. He ascended unto Heaven and Sitteth on the right hand of God,
the Father Almighty. From thence He shall come to judge the quick and
the dead. I also believe in the Holy Ghost, the communion of saints,
the forgiveness of sins, the resurrection of the body, and the life
everlasting.

Christians are monotheists (believers in one God). The early
church, however, developed the characteristic Christian
doctrine of the Trinity, in which God is thought of as Creator
(Father), Redeemer (Son), and Sustainer (Holy Spirit), but one
God in essence.

Christianity has an unswerving belief that it is the only true
religion, the only path to salvation. This engenders a missionary
zeal, an urgency to evangelize around the world. Stress is placed on
acceptance of Jesus as God and Savior, on good conduct, compassion,
service to mankind, faith, and preparation for the Final Judgement.
Only good Christians will be saved.

A substantial differences in faith exist among the various churches.
Those in the Protestant tradition insist on Scripture as the sole
source of God’s Revelation. The Roman Catholics give greater
importance to the tradition of the church in defining the content of
faith, believing it to be divinely guided in its understanding of
scriptural revelation. They stress the role of ecumenical councils in
the formulation of doctrine. In Roman Catholicism, the pope is
regarded as the final authority in matters of belief. A prominent
feature of the Roman Catholic and Orthodox churches is Monasticism.

The Roman Catholic and Orthodox churches have an all male threefold
ministry of bishops, priests, deacons, and several minor orders. The
Roman Catholic church is headed by the pope. In the Orthodox churches
and those of the Anglican Communion (which retain the threefold
ministry) major decisions are made by the bishops acting as a group
with lay consultation, sometimes with votes. Church government among
Lutherans, Reformed, and other Protestants generally involves the
laity even more fully, policy being determined either by local
congregations or by regional assemblies composed of both clergy and
lay people. Most Protestant churches, including some provinces of the
Anglican Communion, now permit the ordination of women.

In most Christian churches Sunday, the day of Christ’s
resurrection, is observed as a time of rest and worship. The
resurrection is more particularly commemorated at Easter, a
festival in the early spring. Another major Christian festival
is Christmas, which commemorates the birth of Jesus.

Ten Commandments from the King James version of the Bible.

* Thou shalt have no other gods before me

* Thou shalt not make unto thee any graven images

* Remember the Sabbath day, to keep it holy

* Honor thy father and thy mother

* Thou shalt not kill

* Thou shalt not commit adultery

* Thou shalt not steal

In God the Father, Creator of the universe, reigning forever distinct
over man, his beloved creation.

Man is born a sinner, and that he may know salvation only through the
savior, Jesus Christ, God’s only begotten son.

That Jesus Christ was born of Mary, a virgin.

That Jesus Christ was crucified on the cross, then resurrected from
the dead and now sits at the right hand of the Father as the final
judge of the dead and that He will return again as prophesied.

That the soul is embodied for a single lifetime, but is immortal and
accountable to God for all thoughts and actions.

In the historical truth of the Holy Bible, that it is sacred scripture
of the highest authority and the only word of God.

That upon death the soul enters Heaven, Purgatory (Roman Catholics) or
Hell according to its earthly deeds and its acceptance of the
Christian faith. There awaiting the Last Judgement when the dead
shall rise again, the redeemed to enjoy life everlasting and the
unsaved to suffer eternally.

In the intrinsic goodness of mankind and the affirmative nature of
life and in the priceless value of love, charity and faith.

God exists as three persons; Father, Son, and Holy Ghost and these
three are one infinite, eternal, holy God, the same in substance,
equal in power and glory (Holy Trinity).

Satan exists and is the chief agent of evil, deception and darkness in
this world.

Golden Rule: Do unto others as they would do unto you.