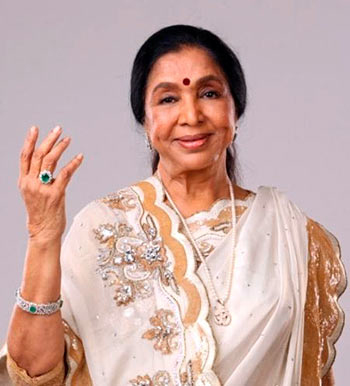 The legendary singer Asha Bhonsle has enthralled generations of Indians. Born on September 8, 1933, Asha Bhonsle’s singing career started in 1943. She has sung a wide range of songs ranging from film music, pop, bhajans, Indian classical music, folk songs, qawwali, ghazals and Rabindra Sangeet. She has sung in a large number of Indian and foreign languages.

Her father, Pandit Dinanath Mangeshkar was a renowned theater actor and classical singer. Her first film song was Chala Chala Nav Bala for the Marathi movie Majha Bal (1943). She made her Hindi film debut with the song Saawan aaya for Hansraj Behl’s Chunariya in 1948. She married 31-year old Ganpatrao Bhosle, but the marriage failed. She sang to make her ends meet, but was not so popular like Geeta Dutt, Shamshad Begum and her sister Lata Mangeshkar. She did not get the best of songs. Her songs in Dilip Kumar-starrer Sangdil (1952) brought her name and fame. Her song Nanhe Munne Bachche in Boot Polish (1954) became very popular.

She continues to sing in movies and her songs in the 1995 movie Rangeela were a big hit.