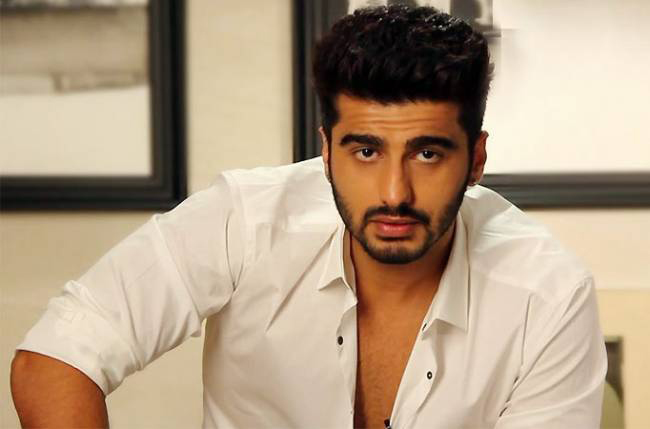 Arjun Kapoor is one of the most talented Indian actors who appears in Bollywood films. The handsome actor made his acting debut with Habib Faisal’s Ishaqzaade alongside Parineeti Chopra in 2012 and since then has been part of several hit movies like 2 States (2014), Gunday (2014) and Ki and Ka (2016). Apart from acting, Arjun has also worked behind the camera as an assistant director, in fact, he started his journey in Bollywood working as an AD and associate producer for films like Kal Ho Naa Ho and Wanted. The dapper actor has even made his presence felt on television as he hosted the popular reality TV show, Fear Factor: Khatron Ke Khiladi in 2016. Arjun Kapoor was one of the two roasts along with fellow Bollywood actor Ranveer Singh who appeared in a Roast comedy show that was held in January 2015.

Born on 26th June 1985, Arjun Kapoor is the son of the renowned Bollywood producer, Boney Kapoor and entrepreneur Mona Shourie Kapoor. Actors, Anil Kapoor, Sanjay Kapoor are his paternal uncles and he is the first-cousin of actors Sonam Kapoor, Mohit Marwah, and producer Rhea Kapoor. The actor has a real sister named Anshula Kapoor and two step-sisters, Jahnavi Kapoor and Khushi Kapoor, the daughters of his step-mother, Sridevi.

The actor went to Arya Vidya Mandir School in Mumbai where he studied till 12th grade. However, after he failed in 12th, he quit studies and went to work in the film industry; his first job was as an assistant director. He assisted Nikhil Advani on his 2003 movie Kal Ho Naa Ho starring Shah Rukh Khan, Preity Zinta and Saif Ali Khan. He also worked as an associate producer on two of his father’s production ventures, No Entry and Wanted. Although Arjun comes from an influential family in the Bollywood industry, the actor never took anybody’s help to begin his acting career.

The actor was in a relationship with Arpita Khan, the young sister of Salman Khan, however, the relationship did not last long and after dating for a couple of years, the duo parted ways. Since, his break-up with Arpita, the actor has been linked with several actresses but Arjun maintains that he is single.

After working behind the camera and battling his obesity issues, the actor worked very hard to get in shape for his debut movie Ishaqzaade that release in 2012. The movie directed by Habib Faisal and co-starring Parineeti Chopra was a huge critical and commercial hit. For his role as Parma Chauhan, a chauvinist brat, Arjun was lauded by the critics and he went on to win his maiden Filmfare Award for Best Male Debut. Following the success of his debut movie, Arjun next appeared in a dual role in the Atul Sabharwal’s 2013 movie, Aurangzeb alongside Prithviraj Sukumaran, Sasha Agha and veteran actors, Rishi Kapoor and Jackie Shroff. Upon release, the movie turned out to be a critical and commercial failure.

In his first 2014 movie, the actor appeared in Gunday alongside Ranveer Singh and Priyanka Chopra. The film directed by Ali Abbas Zaffar is a fictional recount of two coal bandits who rise to become the most notorious and powerful goons in Calcutta in the 1980’s. The movie was a smashing hit and the on-screen chemistry between Arjun and Ranveer was much appreciated by the critics as well the audience. The movie went on to gross more than 100 crores INR worldwide. After appearing in three consecutive crimes movies, the actor appeared in his first romantic-drama movie 2 States, which was the adaptation of the author Chetan Bhagat’s novel of the same name. The movie also starring Alia Bhatt in the lead role emerged as a major commercial hit; it grossed more than 100 crore INR in domestic ticket sales.

With two 100 core plus movies in his kitty in the same year, the actor next appeared in Homi Adajania’s Finding Fanny, which was also his last release in 2014. The English satirical movie also featuring Deepika Padukone, Naseeruddin Shah, Dimple Kapadia and Pankaj Kapur in the lead roles received critical acclaim. The following year, the Arjun was cast alongside Sonakshi Sinha in Amit Ravindernath Sharma’s Tevar, which was the remake of the super-hit Telugu film, Okkadu. The film got terrible reviews with Raja Sen, a film critic stating “yet another of those mindless South remakes.” The movie was a commercial disaster too.

In 2016, the actor appeared as a stay-at-home husband in R. Balki’s Ki & Ka alongside Kareena Kapoor Khan. The romantic-comedy movie, which attempted to break the gender stereotypes in the society, opened to mixed critical reviews but it turned out to be a commercial success. With only one release to his credit in 2016, next year, in 2017, Arjun was cast alongside Shraddha Kapoor in Half Girlfriend, which is a movie adaptation of Chetan Bhagat’s novel of the same name. The same year, he was seen in Anees Bazmee’s Mubarakan, which also stars his paternal uncle Anil Kapoor, Athiya Shetty, Ileana D’Cruz, and his Two States’ co-star Amrita Singh.