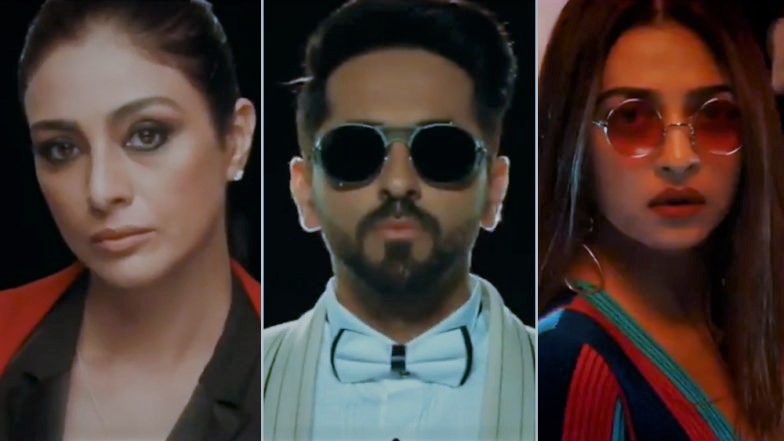 Okay, Ayushmann Khurrana is only pretending be blind in Sriram Raghavan’s Andha Dhun. If that is a spoiler then don’t blame me. It is in the trailer. In two places in the well-cut but eventually phoney trailer, Ayushmann playing a blind pianist, gives us broad hints that he is not what he seems.

One scene has him reaching out into Radhika(Omnipresent) Apte’s bag of popcorn while they watch a movie together in a theatre (which one, Blind Faith?).

Apte looks suspiciously at her ostensibly unseeing movie partner. We can’t blame her. How many blind people “see” films and know exactly where to put their fingers(in the bag of popcorn).

At another crucial spot in the restless trailer while Ayushmann (Sightless) Khurrana is driven by Tabu ,the vehicle stops suddenly. Ayushmann asks Tabu if they have an autorickshaw in front of them which has a picture of Aishwarya Rai Bachchan in the back.

I can swear Tabu gives Khurran exactly the same look that Apte did in the movie theatre. Did Radhika Apte and Tabu attend the same acting school? More to the point, why is the incandescent Tabu being relegated to ‘character’ parts? Sure, she brings a lot of character to her parts. But is that reason enough to pair her with, of all people, Anil Dhawan, as Andha Dhun does?

Many won’t recognize Anil Dhawan under that hideous wig. (Hint: he is director David Dhawan’s younger brother and Varun Dhawan’s Chachu) . Anil Dhwan was once a handsome leading man in the 1970s to Jaya Bhaduri in Piya Ka Ghar and Annadata .In his comeback film he is Tabu’s husband and she seduces him with crab which she claims has aphrodisiacal qualities.

“Don’t ask me to spell ‘aphrodisiac’. But I can show you what it means,” Tabu says in her huskiest tone. Anil Dhawan looks like he has just been offered a lead by his brother in a remake of Manmohan Desai’s Chacha Bhatija with Varun.

I want to see Andha Dhun just for the pleasure of watching Tabu seduce, giggle, Anil Dhawan. Oh yes, the trailer tries to be funny about blindness. “See you,” Radhika waves airily to her blind lover-boy. Then she adds, “I mean I will see you.”