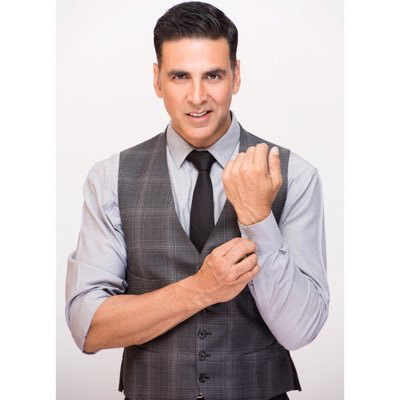 Akshay Kumar is a handsome and dashing hero of Bollywood. Rajiv Hari Om Bhatia is popularly known as Akshay Kumar. He was born on 7th September 1967. Before becoming an actor he studied martial arts in Hong Kong and worked as a chef there. He tied the nuptial knot with Twinkle Khanna and their son Aarav was born on 15th September 2002. For his expertise in martial arts he is often called the Bruce Lee of India.

It was at the insistence of his friends that Akshay Kumar decided to try his luck in acting. After working for a few modeling assignments, he received an offer from Raj Sippy to act in his film Saugandh(1991), which however couldn’t do well in the box office. It was Abbas-Mustan’s thriller ‘Khiladi’ which made him a star. He has mostly acted in thrillers and action movies like Main Khiladi Tu Anari (1993), Elaan (1994), Mohra(1994), Sabse Bada Khiladi (1995) and Khiladiyon Ka Khiladi (1996). He even did few romantic films such as Yeh Dillagi (1994), Dhadkan (2000) and Andaaz (2003). He did a number of films with the name Khiladi such as ‘Khiladiyon Ka Khiladi’, ‘Mr. & Mrs. Khiladi’ and even an ‘International Khiladi’.

Akshay Kumar’s comic role in Mr and Mrs Khiladi (1997) was not quite successful. But finally he established his talent and proved that he could act in action movies , romantic movies and even in comedies with equal ease. In the year 2000, Hera Pheri was released which became a hit. He then became a first choice for directors in comedies such as Awara Paagal Deewana (2002), Mujhse Shaadi Karogi (2004), Garam Masala(2005) and Phir Hera Pheri. His dramatic roles in films like Ek Rishta (2001), Bewafaa (2005) and Waqt: The Race Against Time (2005) was appreciated by his fans. His recent release Namastey London(2007) did fairly well at the box office.

He won several awards which include: